The so called Circle of fifths is what you will 'discover' when you start experiencing the question and answer, tense and release feeling of a dominant-seventh chord resolving to its corresponding tonic chord.

If we arrange those chords such that each question (the dominant seventh) chord is followed by its answer chord (the tonic) as a new seventh chord you get a sequence like
...B7

Extending the range, ignoring enharmonic exchange and folding the sequence to a circle, we get the Circle of fifths: 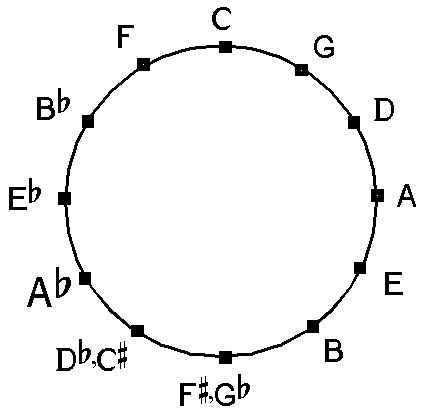 Each step to the left on the circle represent a musical fifth (7 semitones) and represents the strong pull of harmony in that direction.

When using chords, the Circle of fifths will be one of your most valuable resources to help you understand what's going on: 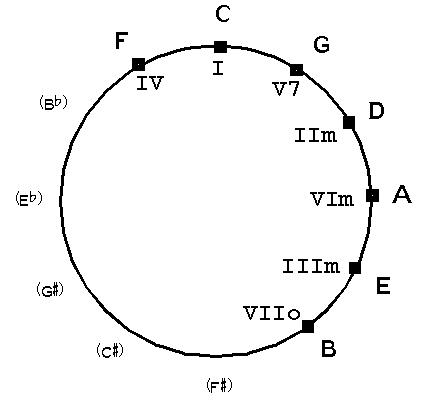 In the diagram above the circle was rewritten mentioning the stage within the major scale of C using seven stages C D E F G A B.

Take a close look to the chords in the song below.

It starts with the C chord (stage I) and moves on to the G7-chord (stage V) as soon as the chord on I does not 'fit' anymore. One bar later we're back at I; the G7 pulls strongly back to the C-chord, we're at home again.The melody alters a bit and the chord sequence C G7 C repeats. The [A] part repeats, using two more C G7 C chord sequences.

Then (at o-o-o ) The C-chord is replaced with a C7 that very strongly pulls to the F-chord. In many songs the the chord at stage IV - left of stage I on the circle - is the chord needed to complete the minimal harmonization of most songs.

Two bars of F and one more C G7 C sequence later we meet a Em-chord (as replacement of the simpler G7) and a sequence Em Am D7 G7 C. Wow!

On the circle you see a journey of counterclockwise steps known to pull the melody inescapably forward to the end.

Looking carefully to the chords of catchy melodies (like many evergreens), you will find heaps of sequences like this one.

When we should rewrite the song using noataion with stages we get:

Tricks and treats of the Circle of fifths.

The Circle of fitfhs has many uses, some obvious, some hidden:

how to find chords with a melody

how to arrange music

how to transpose music